Get to know About Glazes 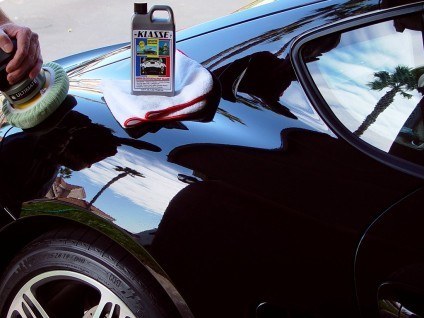 Get to know About Glazes

Generally, a glaze is a polish enhancing item. This is used after polishing to cover any remaining flaws that polishing alone may not be capable to handle. It contribute even more vigor when wax is used over it. By covering microscopic flaws, light is more symmetrically and evenly mirrored that gives your car a lustrous, deep, crisp, and clean shines that a normal wax and polished just cannot match. Now, though you may be considering that Glazing  are employed during major details or just before car shows, think about one of the more frequent application of glazing. Body stores make use of glazes for restoring the shine and reduce hazing after multipart are accustomed to reduce orange peel, heavy scratches, and further paint problems. To some level, by glazing after doing polishing you are just including more of a shine into the finish of your car.

What Does Glaze Do?

Generally, a glaze is an elective method of the process of detailing. However when employed in the right way it can  add an extra layer of depth and gloss to the paint. Glazes are basically polishes that strand kaolin clay, oils, or some other material. This is to boost the gloss and depth. While being capable to hide or mask some small flaws in the paint. Glazes are wonderful products to employ just before a car-expo because it can aid to boost the gloss and depth, particularly on light-shaded cars where this is frequently tough to achieve.

One of the drawbacks of making use of a glaze is to eliminate waxes to mix to the paint with the utmost potential. Still the wax and sealant will secure appropriately, it simply not remain for a long time it will when it was employ on the uncover paint. The expectations of several people are frequently too high in terms of a glaze-filling in small flaws. If your vehicle is fill with scratches and swirls. You are much better off spending some money in a polish and eliminate the marks. They are again a long-lasting fix, the fallouts from a glaze are momentary. It is important for your car to be polish, clay, or wash before making use of a glaze for greatest fallouts.

The Difference between Polish and Glaze

Even though this frequently stumble car lovers, the basic difference between polishes and glazes is easy. Polishes are rough and you polish your vehicle, you smooth your paint at a minuscule level.

Glazing doesn’t do such things. But instead they cover small clear coat lines and flaws that polishing leaves behind. Albeit they may not be noticeable to the human eye.

The conclusion is that all the 3 exterior car care goods work together. Waxes, glazes, and polishes are actually un dividable and should be the element of the same procedure. For one, we say that a procedure of polishing is not actually accomplish without a glaze. If you are doing wax without glazing, you are possibly losing out a well-like and dramatic shine.

What Crystal Shine achieves with your car seats

At Crystal Shine Auto Detailing, Dubai, it’s all about the right equipment, the right expertise and plenty of time. Certainly, a stiff brush and powerful chemicals would get rid of dirt quickly. But it’s important to protect the fabric, and so, nothing harsh ever comes close.

With some of the most powerful wet vacuums in the business, and the gentlest and most advanced of cleaning agents, everything in your seats that you don’t want comes out. There is no residue, and with powerful drying equipment, everything’s left nicely dry. Not to forget the insides of the bolster cavities and those seat belts – very difficult areas to clean; they get perfectly done each time.

You’ll get service from a motivated crew

If you’ve heard scary stories about carwash centers that scratch cars, it does happen. The alternative is to find professional auto detailing that specializes in auto interior shampooing. If you’d like your car to look as amazing as you know it does underneath those layers of dirt, and if you want polite, professional, responsive service from people who are always up to a challenge when they spot a stubborn stain, call Crystal Shine Auto Detailing, Dubai. You won’t pay a lot, and you’ll have fun watching your car start to gleam again.

What our clients say about us!

Your car is always in great hands with us